This method of operation virtually eliminates malfunctions that are common to direct impingement gas systems since hot carbon fouling and waste gases do not enter the receiver area. This is the same key feature critical to the success of the current generation of HK rifles used by leading military and law enforcement customers.

The MR762A1 LRP uses a barrel produced by Heckler & Koch's famous cold hammer forging process. The highest quality steel is used in this manufacturing
process, producing a long-life barrel that provides superior performance with minimal degradation of accuracy and muzzle velocity after prolonged use. The barrels are manufactured in Germany and finished in the USA. 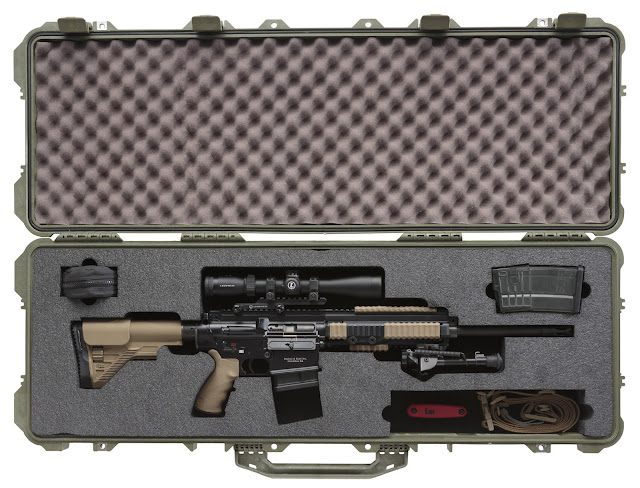 The MR762A1 used in the "Long Rifle Package" is being produced with the same commitment to quality as German-made HK firearms. By using joint U.S./ German manufacturing, Heckler & Koch leverages the relative strengths of two continents to make the preeminent AR-type firearms, combining the design innovations of the USA and Germany into superior products.
Additional accessories and add-ons for the LRP variant of the MR762A1 include an ERGO Pistol Grip from Falcon Industries, the same Blue Force Gear sling used on the HK M27 IAR supplied to the USMC, and an OTIS cleaning kit. The rifle package, complete with one 20 and one 10-round magazine is shipped ready to use with the scope attached in a compact 42-inch Model 1720 Pelican case.

The MR762A1 LRP has all the features sought by civilian precision shooters as well as law enforcement organizations seeking a basic and lighter weight alternative to the HK G28 series of designated marksman rifles.