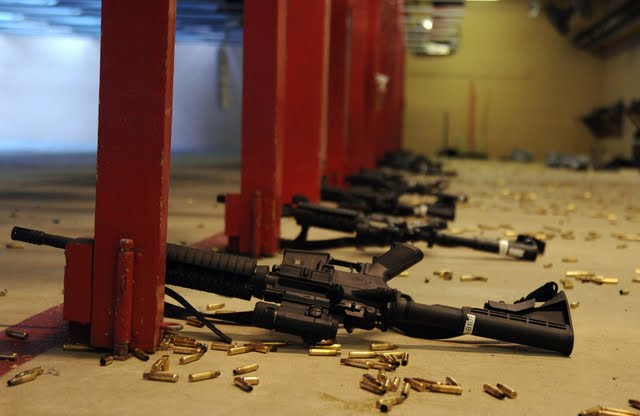 Special ops model goes Army-wide; more weapons upgrades in the works
By Lance M. Bacon - Army Times Staff writer
Posted : Saturday Apr 30, 2011 9:46:41 EDT
Half a million soldiers will soon trade their M4 for an enhanced version of the Special Operations Command M4A1. The Army also will replace its 600,000 M16s with the enhanced M4A1 — or something better.
These are among a dozen changes that will provide soldiers a lighter and more lethal arsenal in the coming years.
M4 upgrades will start with SOCOM’s M4A1, which has a heavy barrel and automatic fire. The heavier barrel reduces warping and erosion, resulting in better performance and longer life. It also allows for a higher sustained rate of fire.
The Army is bettering SOCOM’s M4A1 by adding ambidextrous controls and improvements to the bolt, bolt carrier and forward rail to increase the carbine’s effectiveness and accuracy.
It will take about 10 years to retrofit the entire inventory, said Col. Douglas Tamilio, project manager for soldier weapons.
Replacing M16s will start in 2014 as the Army looks to “pure fleet” with carbines. The big question is whether the M4A1 or an entirely new weapon will be picked to replace the 600,000 M16s. Tamilio thinks a new carbine will emerge.
“I’m very positive in my outlook that the Army is going to see a new carbine,” he told Army Times. “I really think they’re going to.”
The Army is hosting a $30 million carbine competition to answer that question. All competitors must present their products by mid-August. No caliber restriction has been placed on new designs. They must be at least a 500-meter weapon and have a higher incapacitation percentage.

Weapons that meet production requirements will square off in 18 months worth of “extreme and extensive” tests. Two million rounds will be fired in myriad scenarios. Weapons will be tested to their destruction point and to determine whether they maintain accuracy throughout their life cycle — something the military has not tested before.
Some of the notable competitors include:
• Adaptive Combat Rifle by Remington.
• XCR by Robinson Armament.
• SCAR by FNH.
• M6A4 IAR, or similar variant, from LWRC.
• SR-16 by Knight Armament.
• CM901 by Colt.
When the dust settles, the winner will be measured against the $1,300 M4A1 to determine whether cost and capability warrants a new weapon. Most major manufacturers have carbines that cost less and offer improvements such as interchangeable barrel sizes and multiple calibers.