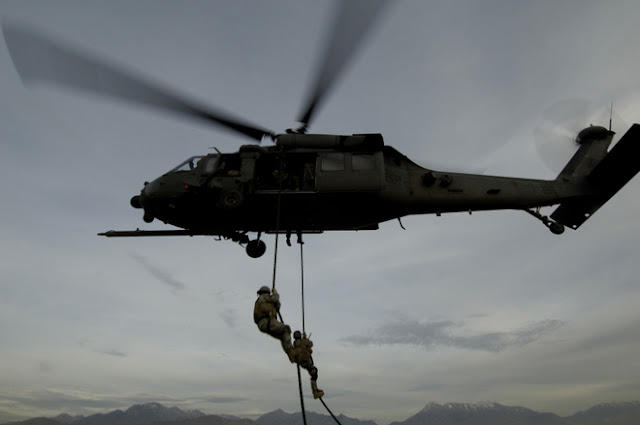 ABBOTABAD, Pakistan (Reuters) - Al Qaeda leader Osama bin Laden was killed in a U.S.-led operation involving helicopters and troops on Sunday night less than two hours' drive from Islamabad, putting Pakistani officials under pressure to explain how he could have lived so close to their capital.

Officials said bin Laden was killed inside a mansion near a Pakistani military training academy in the town of Abbotabad.

Pakistan's arch-rival, India, was quick to comment, saying the news underlined its "concern that terrorists belonging to different organisations find sanctuary in Pakistan".

A Reuters photographer in the valley town of Abbotabad north of Islamabad said police had blocked the road leading to the area where the night-time raid at a huge compound took place.

"After midnight, a large number of commandos encircled the compound. Three helicopters were hovering overhead. All of a sudden there was firing toward the helicopters from the ground," said Nasir Khan, a resident of the town.

"There was intense firing and then I saw one of the helicopters crash," said Khan, who had watched the dramatic scene unfold from his rooftop.

Senior Pakistani security officials said the operation, carried out at around 1:30 a.m., involved both helicopters and ground troops.

A Pakistani military helicopter crashed near Abbotabad on Sunday night, killing one and wounding two, according to local media. It was unclear if the crash was related to bin Laden's death, but witnesses reported gunshots and heavy firing before one of two low-flying helicopters crashed near the military academy.

Express 24/7 television showed an image of what it said was bin Laden shot in the head, his mouth pulled back in a grimace.

Bin Laden was the mastermind of the Sept 11, 2001 attacks that killed almost 3,000 people and put the United States on a decade-long war footing.

Just 10 days ago Pakistan's army chief addressed army cadets at the academy near where bin Laden was killed, saying the country's military had broken the back of militants linked to al Qaeda and the Taliban.

"For some time there will be a lot of tension between Washington and Islamabad because bin Laden seems to have been living here close to Islamabad," said Imtiaz Gul, a security analyst.

"If the ISI had known then somebody within the ISI must have leaked this information," Gul said, referring to the Pakistani intelligence agency. "Pakistan will have to do a lot of damage control because the Americans have been reporting he is in Pakistan ... this is a serious blow to the credibility of Pakistan."

Pakistan's government has not commented on the operation, raising questions about how much it knew in advance.

President Barack Obama told a news conference in Washington he had called Pakistan President Asif Ali Zardari, but it was unclear if that was in advance of the CIA-led attack.

"Over the years, I've repeatedly made clear that we would take action within Pakistan if we knew where bin Laden was. That is what we've done," Obama said.

"But it's important to note that our counter-terrorism cooperation with Pakistan helped lead us to bin Laden and the compound where he was hiding."

Defense analyst and former general Talat Masood said the fact bin Laden was killed in a joint operation would limit the damage to Pakistan's image.

"There should be a sigh of relief because this will take some pressure off Pakistan," Masood said. "Pakistan most probably has contributed to this, and Pakistan can take some credit for this -- being such an iconic figure, it's a great achievement."

Abbotabad is a popular summer resort, located in a valley surrounded by green hills near Pakistani Kashmir. Islamist militants, particularly those fighting in Indian-controlled Kashmir, used to have training camps near the town.

Resident Sahibzada Salahuddin said he was asleep when explosions woke him.

"I was sleeping when all of a sudden there was a blast. It was followed by two more small blasts ... I opened the door and saw the entire compound was on fire," he said.

U.S.-Pakistan ties have been strained this year by the case of a CIA contractor Raymond Davis, who shot dead two Pakistanis in Lahore on January 27, as well as by tensions in Pakistan over U.S. drone strikes that have fanned anti-American sentiment.

Pakistan's powerful ISI has long been suspected of maintaining ties to the Haqqani network, cultivated during the 1980s when Jalaluddin Haqqani was a feared battlefield commander against the Soviet Union in Afghanistan.